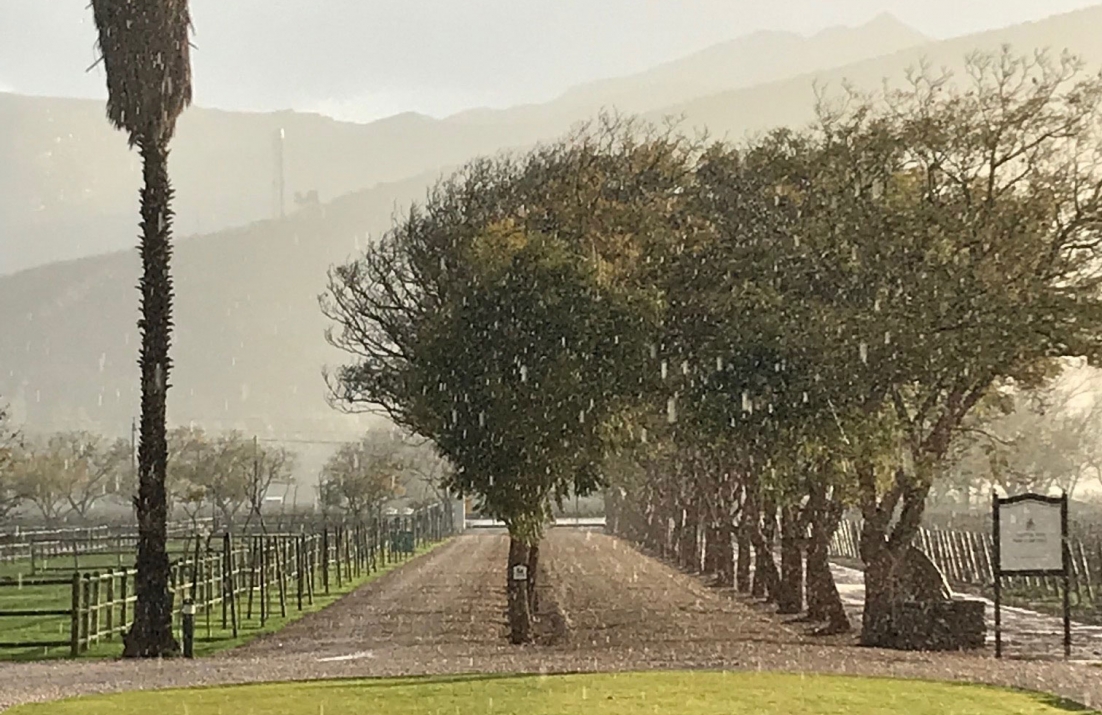 After an 11 hour flight we touched down in Cape Town on Saturday morning. The first thing you are confronted with as you step off the plane is hundreds of posters and displays about the drought in South Africa and how much water should be used per person per day (50 litres maximum as it turns out). This is further reinstated by a trip to the loos where the taps have been turned off and hand sanitisers are used instead – fine for cleaning hands, not quite so easy if you want to brush your teeth!

After picking up our hire car we had an important decision to make – do we a) find somewhere to have lunch before heading up to Robertson (bearing in mind we'd only had BA plane food for our last two meals) or b) ignore food, drive over an hour out of our way to go and find some penguins at Simon's Town... we obviously choose option b!

After a spot of penguin watching we embarked on our journey up to Robertson to De Wetshof. As you drive up the Jacaranda lined road a beautiful large white house comes into view.  The house and the winery which sits directly behind it were constructed using blueprints of buildings which were built for the De Wet family in the late 1700’s by architect Louis Michel Thibault.

We took a tour around the vineyards and winery.  I'm sure most people would agree that you can learn a lot about wine, how it's made and what factors influence the style from reading and research but when you are in the vineyards surrounded by the vines that make the wines you know so well, you get a true sense of place and understanding of the wines.  The heavy clay soils have been very Important in the Last few years as they retain water well so are able to sustain the vines in times of drought.  The soils of the region also have a high limestone content which gives their chardonnay's their distinctive mineral character. This limestone content makes the region very successful at horse breeding too as the calcium content makes horses big and strong so there are many stud farms in the region.

Robertson has other unique characteristics, for example it is the only wine region except from Cape Augulus which is influenced by the Indian ocean. This seems unlikely when you look at a map and see how inland Robertson sits but the land up to Robertson is very flat so there is nothing before it to stop the moderating ocean influence from reaching them.  This is a benefit in the summer on the very hot days as the oceans winds cool the grapes in the afternoon and evening creating a large diurnal range, this extends the ripening period of the grapes as well as drying the grapes if they are wet which helps them to avoid mould or mildew. Robertson itself sits between two mountain ranges; the Langeberg and Riviersonderende which channel these ocean breezes to the valley.

Another interesting point to note is De wetshof’s sustainability practices; they have been awarded ‘champions’ by WWF (champions of wildlife that is, not wrestling!), this is because for every one hectare they plant, they have 2 hectares unplanted and ‘green' for biodiversity.

After our tour we tasted through their whole range, tasting the 2018 vintages of their younger wines, the Bon Vallon and Limestone Hill were both particularly good. By the time we finished tasting, the sun had gone in and it been chucking it down with rain (good for the water reserves, not so great if you were not appropriately dressed!) and the large diurnal range had come into full force. It had gone from mid twenties to 3 degrees!

Read more about what else our buying team got up to here and here...